Crema Catalana is a traditional Spanish dessert, also known as burnt cream, characterized by its citrus and cinnamon aroma and its crunchy caramelized crust.

I love the Spanish food and what my country land offers to our gastronomy. If you have ever been to Spain, you know it has different climates and landscapes from north to south and from east to west. Therefore, we have a rich gastronomic culture since every region provides its own ingredients and culinary specialties.

Although crema catalana and crème brûlée belong to the same family of custards and both are called “burnt creams” ( they are topped with burnt sugar), there are certain differences between them.

Yes! Catalan cream is made with cornstarch, the flour is corn-based, not wheat-based; therefore, it is gluten-free. This dessert is suitable for celiacs.

Crema catalana is usually served in the typical clay dishes. It is a very traditional dessert and is part of the heritage of our rich gastronomic culture.

If you have never made this homemade dessert, and you are wondering how to make crema catalana, I assure you that it is very easy to make it.

How To Make Crema Catalana

1. In a saucepan, pour a liter of milk and add in a cinnamon stick and a lemon peel. It is important that the lemon peel has no white as it bitters.

2. Put it over high heat and, when it starts to boil, lower the heat and let it cook for 5 more minutes. Set aside with the saucepan covered, so that the milk continues to take on the flavor.

3. Separate 8 egg yolks from 8 egg whites, and place the yolks in a bowl. Add 150 grams of sugar and beat the mixture with a hand held mixer until it turns foamy and pale yellow.

4. Add 2 tablespoons of cornstarch into the mixture and beat with the hand mixer until well integrated.

5. Pour the milk into the mixture through a sieve, removing the cinnamon stick and the lemon peel. Whisk with the hand held for one second .

6. Once you have all the mixture integrated, put it back on the stove over a medium heat. Stir with a whisk until it starts to boil. You will see that it begins to thicken, but don´t let it get too thick because when it chills it will also thicken and we want it to be creamy.

7. As soon as you see the first boiling bubble, remove it from the heat and pour it into traditional clay dishes.

8. Allow the custard to cool at room temperature for about 10 minutes. Then, put it to chill in the refrigerator for 3 hours. Keep in mind this resting time in case you want to serve the cream the same day or overnight.

How Do I Caramelize Crema Catalana ?

First, sprinkle a thin layer of sugar over the top of each dish with a spoon. Then get out your small kitchen blowtorch and carefully bring the blue flame close to the sugar until it becomes first liquid and subsequently turns golden brown. This is why it is also known as burnt cream.

I Don’t Have A Blowtorch, Can I Caramelize Crema Catalana In The Oven?

Yes, you can burn the sugar in the oven, putting crema catalana as close as possible to the broiler. First, preheat the oven to 428ºF (220ºC), and when it reaches the temperature, sprinkle the sugar onto the cream and, immediately, put it in under the broiler for a few minutes. Be careful not to burn it! It might not get the same results as with the blowtorch, but it will work.

When Should I Caramelize Crema Catalana ?

Just before serving. I recommend taking crema catalana out of the fridge half an hour before eating it, so you can enjoy savouring its creaminess.

If you liked this crema catalana recipe, I invite you to try other Spanish desserts. 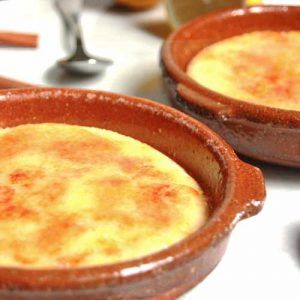